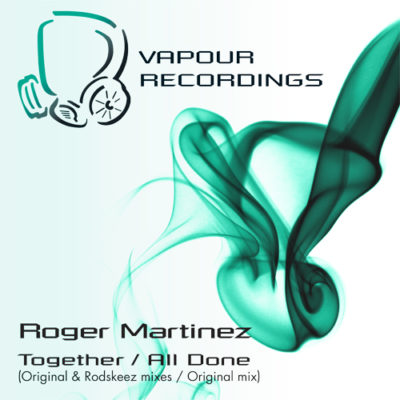 Vapour Recordings presents the next release for 2011 and time we are proud to have the very talented Roger Martinez on board at Vapour presenting us this cracking 3 tracker with the cuts titled Together (2 mixes) & All Done.

Roger Martinez has been praised numerous times. In combination with his seamless musical mixing technique he, as an upcoming talent, has surprised many with his performances. Although he has been known through the years as a Progressive DJ, his sets are living proof that his musical taste reaches much further. Especially in his own productions he tries to go beyond genres and formats and this EP is a perfect example of that..

This package we see both sides of Roger’s skills. First up we have the track – Together which is a very tough, cool and uplifting main room special. This track also comes with a remix from another man we are proud to Introduce to the label in Rodskeez, hailing from Sydney Australia. He has turned in a killer alternative to the original which is very bass driven, tough and will slam on any underground dancefloors.

To wind up the package we see the more deeper and Techy side of Roger with the track – All Done. This track is a great rolling little Tech House number and also very funky as well. The perfect one to use in your warm up set just as your starting to build things up.

You will be hearing a lot more from Roger and Rodskeez this year as they are two people quickly on the move, and we are proud to have them both here on Vapour.

We feel this package is a stunner and we hope you agree.